The development of service economies in the Western world has led to a debate on the quality of new service jobs as many are low-wage jobs with poor working conditions and career opportunities. Although the incidence of low-wage service work is somewhat lower in the Nordic countries than elsewhere in Europe, it is increasingly addressed and debated. Employees find it hard to make a living from their job and to work the working hours requested, whereas employers find it hard to attract and retain employees. This article introduces the concept of ‘living hours’ to capture the segmentation processes in low-wage service work in the private sector of Denmark, Norway and Sweden. The concept of living hours is used to explain developments in low-wage service jobs that are not explained by the concept of a living wage. On the basis of cross-sectional data from the European Labour Force Survey, the article demonstrates how the increasing use of part-time and Sunday work since the crisis interacts with the increasing shares of young workers and migrant workers. The analysis focuses on retail and hotels/restaurants, which employ the majority of low-wage service workers in Denmark, Norway and Sweden.

The paper by FAOS-researcher Anna Ilsøe is published in the journal 'Labour & Industry: A Journal of the Social and Economic Relations of Work, vol. 26, issue 1, 2016. 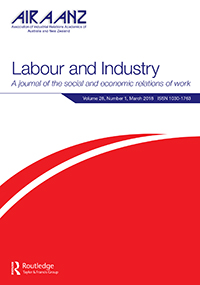